Mixed Convection from a Rough Plate

Its been a long time since my last blog entry; there are new developments.

After completing the vertical convection measurements, I returned the Convection Machine to its horizontal orientation and did some runs to make sure everything was as before.  But things were not the same.

With the rough side facing down, the transition where mixed convection dropped below the linear asymptote had disappeared.  Varying parameters did not restore the dip.  Changing inclination of the plate; tilting the wind-tunnel; resealing the cardboard around the fan; nothing I tried restored the dip.  Something has permanently changed in the wind-tunnel or the plate.

So I reran the measurements of horizontal upward and downward facing mixed convection.  The new curves match simple L2 and L4 norms of the forced and natural convection components.  My guess of what changed has to do with the suspension of the plate.  The vertical suspension was a single long wire which, after hooking around the a top corner post, wrapped across the back and hooked around the other top corner post.  Wrapping around the back compressed the back sheet and insulation against the back side of the rough plate.  Perhaps the pressure closed gaps in the glue between aluminum and insulation. 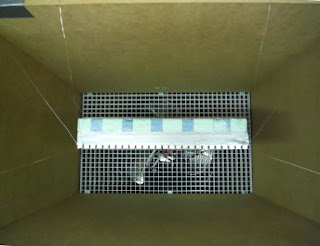 Having data for horizontal forced flow with 3 plate orientations, it was time to measure downward forced flow with a vertical plate. Because vibration of the plate had caused excess convection with the single wire suspension, I added two wrap-around wires pulling in opposite directions to the plate suspension.  This new suspension is quite rigid and works with the wind-tunnel in any orientation.

I added four legs to support the wind-tunnel upright with the fan drawing downward.  I was expecting either L2-norm mixing or for convection to drop below the natural level when the natural and forced components were equal.  But it was neither!  I devised a model which transitions between L2 and L4 norm that matched the measurements well; it is detailed in my paper.

Because the opposed mixing was unexpected, aided mixing had to be tried.  It also turned out to involve a transition between L2 and L4 norms, but with a gentler transition.

I have finished writing the article and put it and the supplementary data on http://people.csail.mit.edu/jaffer/convect

As described in the paper, the next step is to shave 4.mm off the rough side of the plate and repeat the measurements.
Posted by Aubrey Jaffer at 11:11 PM