The new back eliminated the dual modes seen earlier with peak ΔT=15K. Reducing the r/min to m/s conversion by 2% (which is within the ± 3% error band of the anemometer) and adjusting the breakpoint results in a beautiful fit! 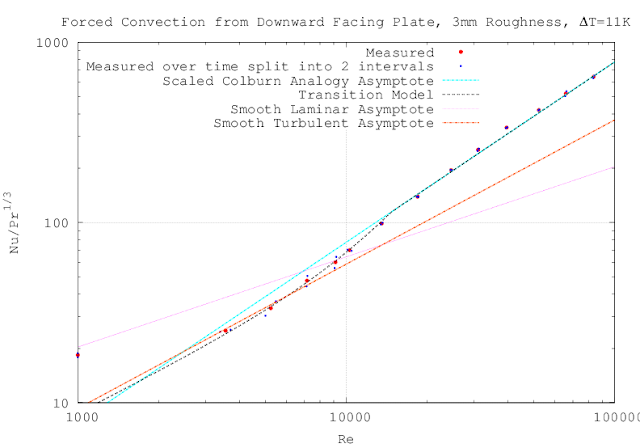 The points at Re=3545 and Re=5231 could be following either the Smooth Turbulent Asymptote or the Transition Model; it's too close to tell. The reason that the Transition Model has less convection than the Smooth Turbulent Asymptote below Re=6000 is because the leading edge of the boundary layer is modeled as thinner than the roughness; but division by the local characteristic length, 0, is undefined at the leading edge.
Posted by Aubrey Jaffer at 3:08 PM No comments:

With the current configuration, I am measuring the natural convection from a plate inclined a few degrees from facing downward. Turning the front tuning pegs shortens the support wires and tilts the plate. 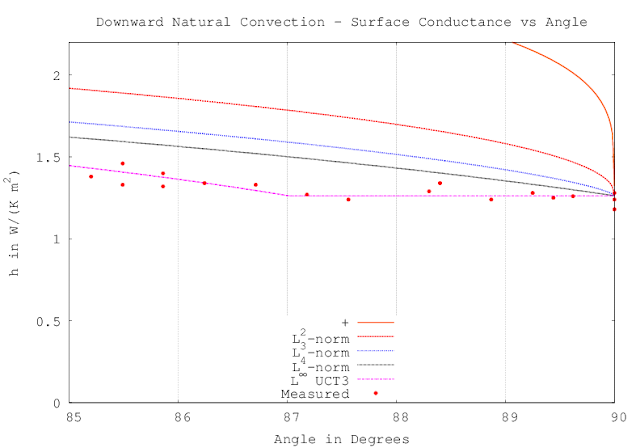 This graph shows that downward convection does not blend with other convective modes. With θ between 87° and 90° downward convection is in control; between 0° and 87° the vertical mode is dominant. I have modified the UCT3 formula in the Downward Natural Convection section with this new knowledge.
The random variation in the plot above makes it less convincing than it might be. I modified the firmware to increase the heating threshold from 5 K to 15 K, which increases the average ΔT from 3.7 K to 11 K and reduces the relative variation by about a factor of 3. 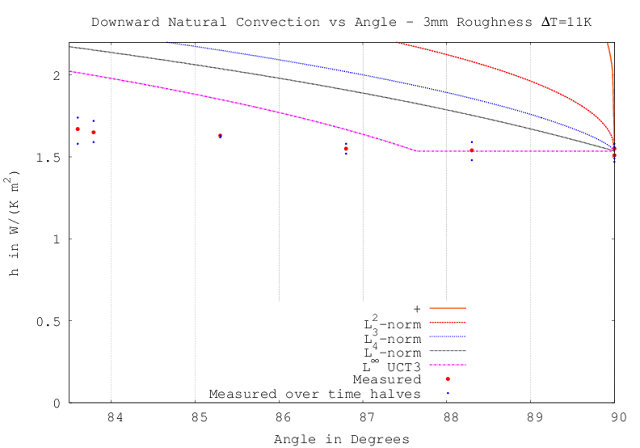 Running the tilt tests at the higher temperature difference results in markedly reduced variation as can be seen by the proximity of the half-interval measurements (black dots) to the full-interval measurements (red dots). But the slope below 87.5° clearly does not match that derived from Nu9.3, the natrual convection from a smooth vertical plate!  More about this below.
I also ran a series of forced convection trials with the 15 K peak temperature difference: 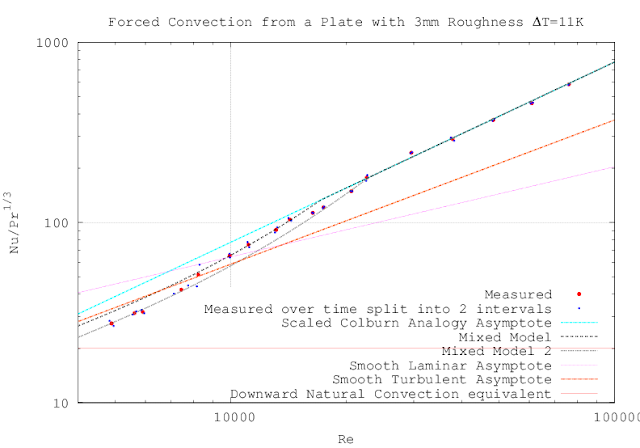 There are several things to notice about this graph. The tests where only part of the plate had roughness penetrating the boundary layer seemed to have two distinct breakpoints: Re=16666 and Re=22222. For nearly all the measurements, the half-interval measurements (black dots) are very close to the full-interval measurements (red dots). There are two which are not so close. The black dots around Re=7440 lie close to the line, indicating the wind speed change which occured partway through the run. This can be seen in the bottom panel on page 8 of the PDF. The dots at Re=8237 had the same windspeed, perhaps indicating that the system spent time in both breakpoint modes.
Below Re=7500 the measurements track a slope of turbulent convection (Re4/5). Unfortunately the wind-tunnel can't produce wind speeds below 0.25 m/s (Re=4900), so we can't see the transition to natural downward convection.
Returning to natural convection, either the natural convection from a rough vertical surface differs from that of a smooth vertical surface or the formula combining the downward and vertical convection is wrong. The former can be tested by suspending the plate vertically. I plan to do this by wrapping the wire suspending the plate around its (insulated) back. In order to protect the insulation from being cut by the wire, a sheet of aluminum should be glued to the back. I was planning to do this already in order to test upward natural convection. 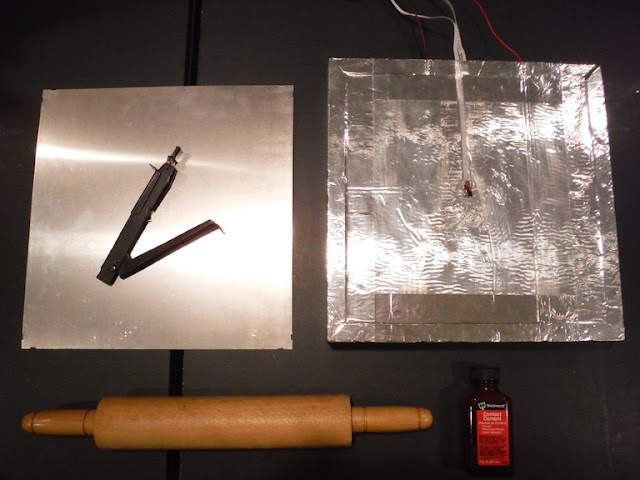 Here is the back side of the plate ready to have the 0.65 mm sheet of aluminum glued to it. Notches have been cut (using the "nibbler" on the sheet) near the sheet corners to catch the wires which will suspend it. 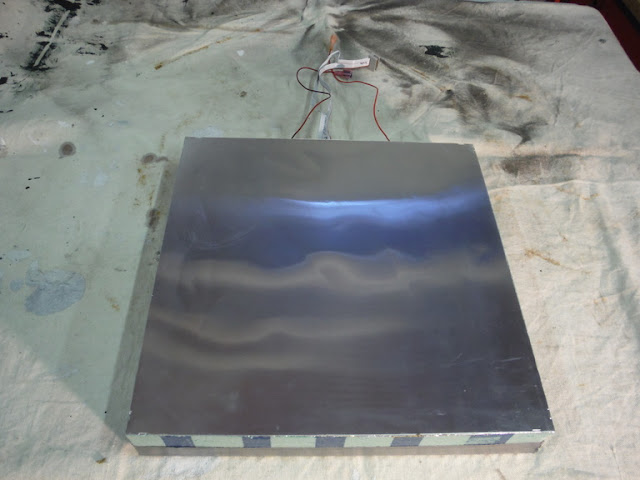 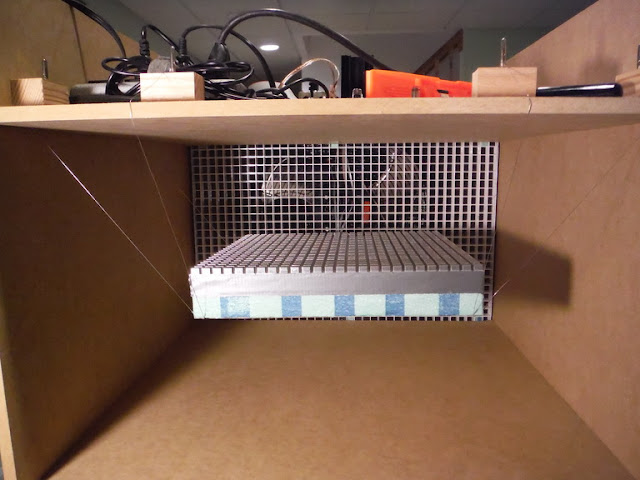 Here the rough surface of the plate is facing up in the wind tunnel. But first I must rerun all the downward facing measurements. 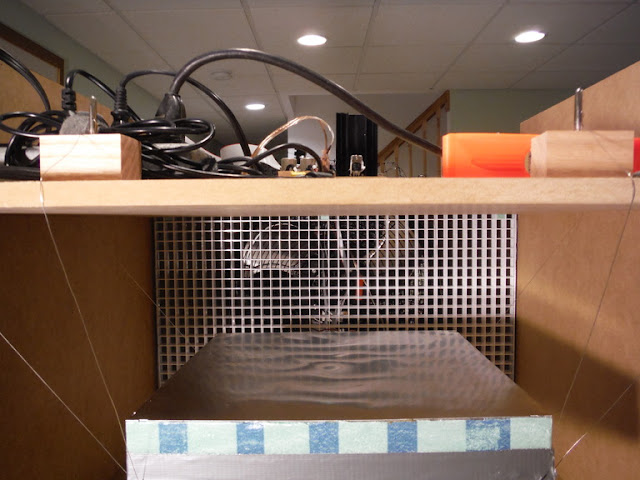 Posted by Aubrey Jaffer at 10:22 PM No comments: