Reflecting the infrared beam off of the fan blades to gauge its rotation rate was receiving spurious ticks.  I moved the photo-transistor opposite the LED so that the blades interrupt the beam, which solved the problem. 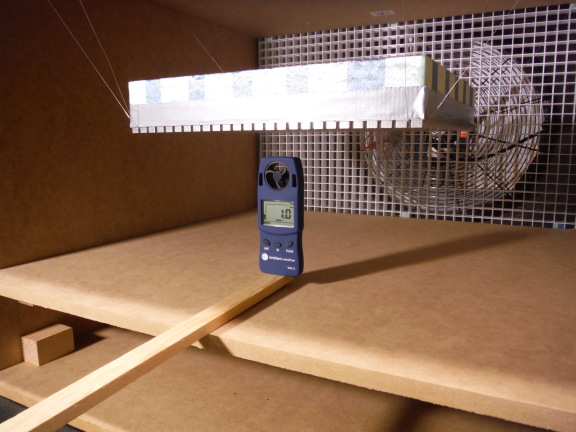 I wrote a program which logs the fan rotation rate every second while capturing the anemometer readings I type in.  Because there is delay between rotational speed changes and air speed in the chamber, my test runs start at full speed, ramp down to 300 r/min, then ramp back up to full speed.  The delay will affect the two halves in opposite directions.  When the delay is properly modeled, the two lines will converge.


From the graphs it was determined that the delay ranged from less than 1 second at full speed to 5 seconds around 300 r/min.  The graph to the right shows airspeed versus rotation rate (compensating for this delay). 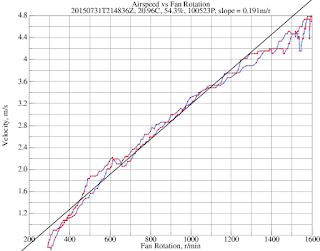 The graph below is a time-series of the same run (with the delay compensated).  Around 2 m/s the airspeed vs rotation rate curve is not monotonic.  The time-series shows this is true both with decreasing and increasing rotation-rate.  And this feature appears in all of the measurement sequences I captured. 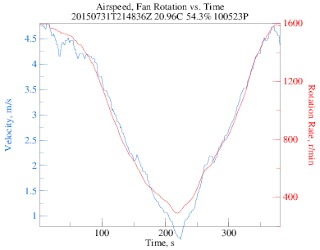 A quick search of the Internet finds engineering "fan laws" saying that air speed is proportional to rotational speed.  The black line on the graph is the sort predicted by fan laws.  It has a slope of 0.191 m/r.

The critical question is whether these non-linearities are properties of the fan-wind-tunnel system or artifacts of the anemometer. 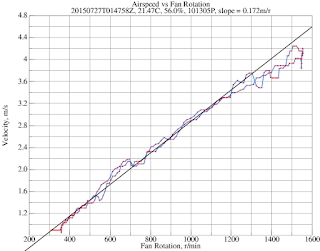 We removed the plate from the chamber and ran the tests again. Because the plate is not reducing the cross-section of the chamber, the airspeed and slope of the black line is less, 0.172 m/r.  The negative slope around 2.1 m/s persists. This does not appear to be hysteresis or flow state because the negative slope happens with both increasing and decreasing speed.  While the rotational speed around which this occurs increases by 100 r/min, the airspeed range is unchanged.  So this test doesn't provide a razor for identifying the source of the non-linearity. 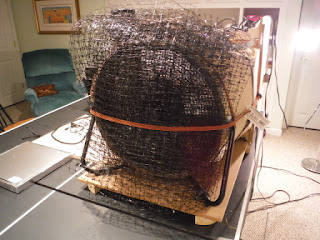 While standing 3 meters in front of the fan running at full speed I felt erratic puffs of air.  Could these puffs be the same phenomena as the 10% airspeed variations found inside the chamber at high speeds?  I repeatedly folded a length of plastic deer fence to fashion a diffuser and strapped it to the front of the fan.  Remember that the fan sucks air through the chamber;  the diffuser is on the exhaust side of the fan. 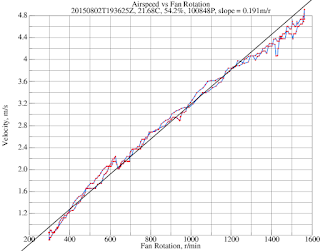 This resulted in a dramatic decrease in the erratic puffing and the airspeed variation inside the chamber.  The high-speed slope variation is reduced, indicating that at least part of this slope is a property of the wind-tunnel.  The 2 m/s non-linearity kink is unaffected. 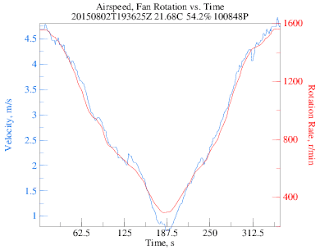 Anemometers perform poorly at low speeds and are calibrated at the upper end of their ranges.  If the "fan laws" hold, I can rely on the more accurate high speed readings and interpolate the rest.  With the diffuser the upper curves are close enough to the straight line to use the straight line in calculations.

Posted by Aubrey Jaffer at 12:21 AM No comments: