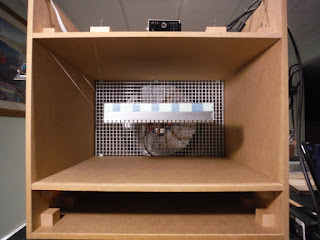 Martin Jaffer helped suspend the plate in the wind tunnel. The plate is suspended from four 0.38 mm-diameter lengths of steel piano wire terminated at eight zither tuning pins in wooden blocks above the test chamber. The wire is sheathed by close-fitting Teflon tubing where it would contact the plate. The plate is not centered, but shifted halfway towards the front of test chamber. This gives more clearance from the turbulent transition regions spreading from the tunnel walls.

There is a strip of duct-tape covering the metal edge between the insulation and the machined surface. Although it is more difficult to model (what is the thermal conductivity of duct-tape?), measurement shows that it reduces the heat flow from the non-test surfaces. 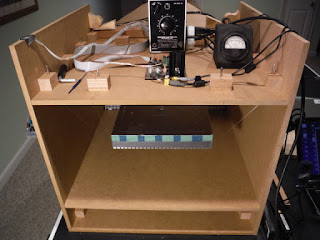 This photo shows the electronics board, cables, and fan speed control. The ambient sensor board (temperature, pressure, humidity) can be seen hanging off the left side of the tunnel. 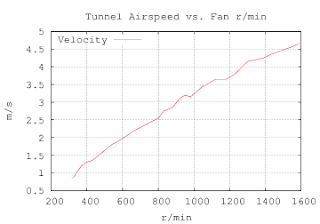 I finished the interrupt-driven code to measure the rotation rate of the fan. Each second it divides the number of times a blade has passed the sensor by the length of time between the zeroth and last blade passing. This reduces quantization error such that most readings are stable to within a couple of r/min. Occasionally there is an extra interrupt causing one reading to spike. It may be possible to correct the spike in software.
Measurements with the impeller anemometer are used correlate the fan rotation rate with the wind speed inside the tunnel. But the two significant digits of the anemometer are limiting. We tried to interpolate the dithering of the low order digit in collecting the data shown in this graph.
Posted by Aubrey Jaffer at 11:15 PM No comments:

http://people.csail.mit.edu/jaffer/SimRoof/Convection/Measurements has been updated with photos of the new insulation, derivation of the model for the back surface, and measurements of natural convection.

The LM35CZ temperature sensor datasheet warns of self-heating for sensors not attached to heatsinks.  So I added circuitry and modified the program to power on the sensor 2ms before it is read and turn it off after.  Surprisingly, it didn't eliminate the ramp, but it reduced the variance to a level comparable with the back surface sensor! 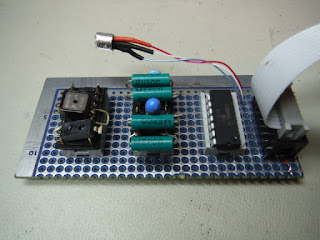 I checked the other components and found that the MPXH6115A6U atmospheric pressure sensor dissipates 30mW (and has a long warm-up time in its specification).  The LM35CZ was mounted next to the MPXH6115A6U on the same header; heat conduction through their leads was responsible for the warmup.  I moved the LM35CZ off of the header and connected it with thin wires, which solved the problem.

I am still left with the mystery of why the LM35CZ in the plate has the large variance.  If the thermal adhesive which fastens it in a hole in the aluminum plate is broken, is self-heating creating the variance?  Disassembling the insulation to examine it may damage the insulation, requiring it to be replaced; so I will leave it as it is for now.

With the upward natural convection measurement looking reasonably consistent with the model, it is time to mount the plate in the wind tunnel. 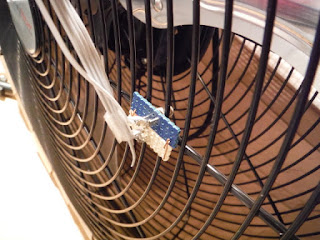 When I rebuilt the electronics, I improved the sensitivity of the opto-interrupter.  Its sensitivity is now high enough that it responds to reflection of the fan blade.  This allows the led and phtotransistor to be on the same side of the fan, which simplifies mounting.  The photo shows the blue board with the LED adjacent to the board with the phototransistor.

Posted by Aubrey Jaffer at 10:42 PM No comments: