In "Insulating Both Sides", the large squares of (polyisocyanurate) foam insulation are faced with aluminum foil, but the borders were extruded polystyrene foam. Their unfaced surfaces would be subject to radiative transfer, which depends on the temperature of surfaces in the room, and is difficult to isolate from convection. I realized that by facing all the insulation with aluminum foil (with emissivity around .08), the radiative transfer would be cut to negligible levels. But there were unintended consequences which are discussed below.

This story will evolve at http://people.csail.mit.edu/jaffer/SimRoof/Convection/Measurements#Integration".

The physical quantities to be measured are:

Previous laboratory measurements of forced convection have been performed by starting the fluid flow and plate heater, waiting until the system reaches equilibrium (as indicated by a stable plate temperature), then recording the measurements of the physical quantities.

Because the heat flow for forced convection over a rough surface is expected to be larger than for a smooth surface, our test plate is more massive than previous experiments in order to maintain uniform temperature across the plate. This results in settling times of minutes in the best case and times approaching and hour at low airflow rates.

Radiative heat transfer is not directly measurable separately from convective heat transfer. The approach here is to minimize radiative transfer by making the test plate and its insulated backside have low emissivity (roughly 8%). The hR of the plate is estimated assuming that the emissive surfaces (mostly the inside of the wind-tunnel) are at ambient temperature. The insulated backside will be at a lower temperature than the plate. With a 5K temperature difference between the plate and ambient, the backside is about 1K above ambient in still air; in moving air this difference will be less. The small temperature difference the backside and ambient, combined with its low emissivity mean that its radiative transfer can be lumped with the backside convection UB(V).

The equation of state for the plate in forced convection is:

By collecting terms not dependent on TS into U(V), the equation of state is simplified:

This linear differential equation could be solved analytically, but because the independent variables are measured at discrete times, it make more sense to solve the analogous finite difference equation.


When data is sampled every second, this simplifies to: 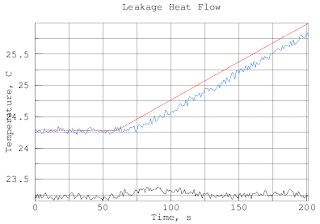 I had originally planned that my controller program would servo the plate temperature in a narrow range. But when I saw the first datasets from the plate being heated, I realized that having the plate temperature slew through a temperature span enables me to separate the dynamics of heating from convection. On the basis of the heating slope I make slight adjustments to C to compensate for the addition and removal of insulation; I won't clutter this article with that detail.

The image to the right shows the calculated TS(t) (red) versus the measured TS(t) (blue) and ambient temperature (black). Clearly there is a delay between the application of heat starting at 60 seconds and the plate temperature. 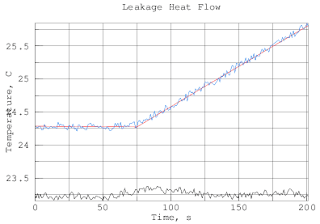 Introducing a 15 second delay for ΠH makes for a much better fit.


The full equation of state could be solved for h(V), but division by TS−TF makes analysis of the noisy signals complicated. As in the delay case, simulation and visualization yield insights more readily than statistics.

My first measurements are of natural convection because V=0 eliminates one of the variables; also because the formulas for natural convection are well established (assuming that it is the same for rough surfaces as for smooth). In the temperature ranges tested here the dependence of h(0) on TS is too weak to materially effect the finite difference equation.
Determining UB(V) is a bit involved. In order to not have insulation projecting out of the four sides of the plate, the back edges of the plate were beveled and this space filled with wedges of insulation. The heat flow through these sides of the plate is larger than the heat flow through the insulation on the backside of the plate; and theory is insufficient to calculate the heat flow through the sides. So it must be measured. But measurement can only be of the heat transfer from all of the plate. Theory does predict the convection from the front of the plate, but the point of this experiment is to measure that. 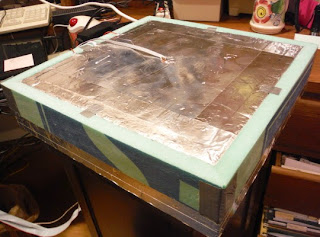 I constructed an insulated cover for the front of the plate. A rough estimate of its conductance is UT(0)=134 mW/K.

If these estimates are good, then the heat flow through the front cover will be 43% of the measured heat flow through the full insulation. The value of UB(V) could then be found by measuring the heat flow with the collar removed and subtracting 43% of the symmetrically insulated heat flow.
But the estimates are not close; in order to match the measured U(0) (blue trace) of the fully insulated plate, the red line on the graph is simulated at U(0)=420 mW/K, which is 36% larger than estimated. 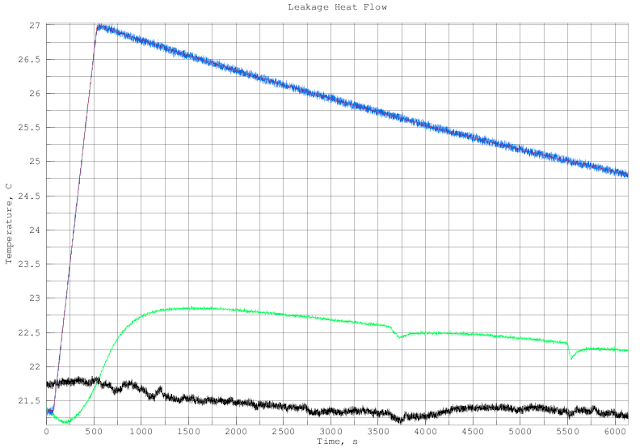 The graph below shows the heating and cooling of the insulated plate facing down (shown in the photograph above). It cools slightly faster than when facing up, perhaps because of the unsealed seams facing upward. With the temperature sensor (visible in the photograph) being on top, its green trace is much closer to ambient because upward convection is more efficient than downward convection. 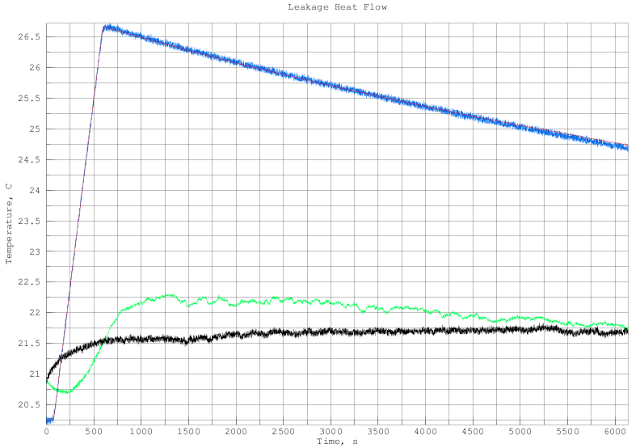 The graph below shows the heating and cooling of the insulated plate facing up with the top cover but without the collar. The simulated U(0)=470 mW/K line (red) shows a bit too much curvature. 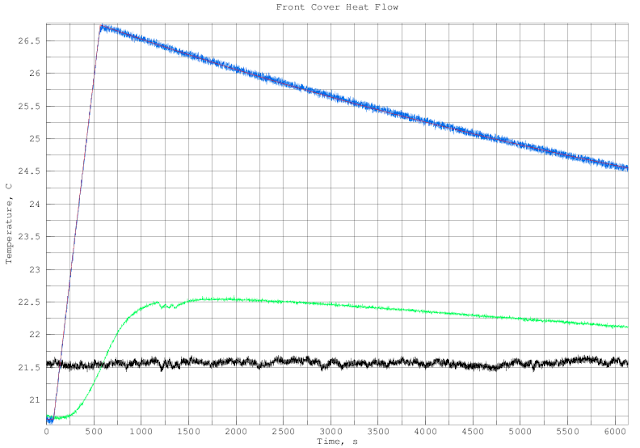 The graph below shows the convection from the plate facing up (without the top cover). The simulation (subtracting 43% of the full-insulation heat flow from the top-cover heat flow) shows significantly less convection than measured. 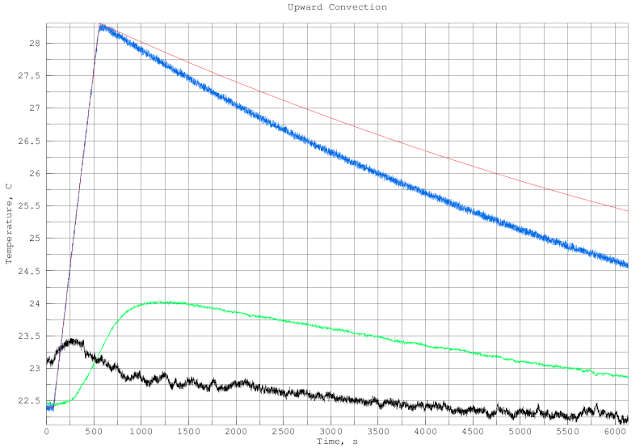 So the estimates of conduction through the insulation were not good enough. However, if I simulate with UB(0)=0.47 mW/K, the plate with the measured top-cover conductance, the plate upward convection matches beautifully! 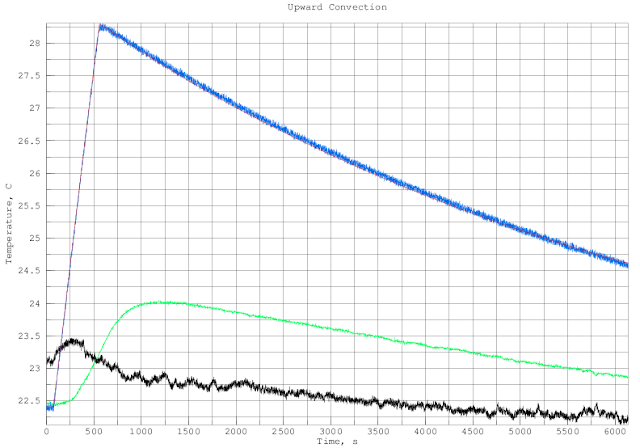 One explanation would be that the top cover reduces the convection from the (four) plate sides by the same amount as conduction through the top cover insulation. The top-cover overhanging the plate sides would somewhat obstruct convection. But coincidences are toxic to science experiments.

Covering the side insulation with aluminum tape (to reduce emissivity) provided a heat conduction path from the areas where the conduction is thinnest to the rest of the back. So I made a cut through the aluminum tape on the sides, and it reduces the full-insulation U(0) from 0.42 to 0.38 W/K (shown below), about 10%. Recall that adding the collar to the plate with top-cover reduced the conduction from 470 mW/K to 420 mW/K, about 11%. This lends support to the idea that the aluminum tape was spreading plate heat to the foil envelope. 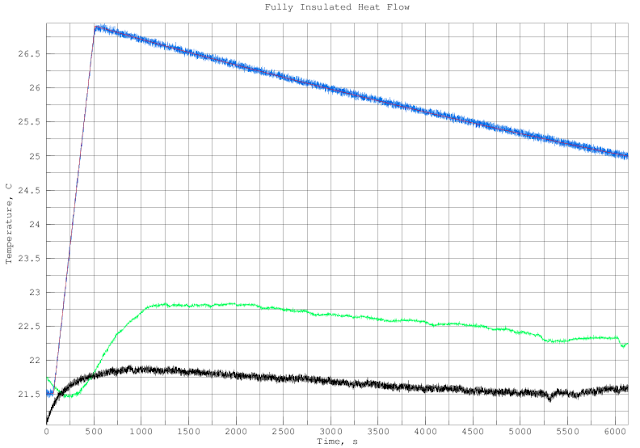 The next step is to make a similar cut to the top-cover and additional cuts to the side insulation and rerun these measurements.
Posted by Aubrey Jaffer at 8:40 PM No comments: