The St.Johns marbling technique uses stylus speeds of only a few centimeters per second. When a stylus is moved quickly through the tank fluid, air bubbles are formed. Bubbles were formed drawing a 25 mm diameter dowel faster than (V=) 20 cm/s through the tank (which also parted the floating paints) in my previous post.

While the formation of bubbles could be due to non-Newtonian fluid behavior, it is worth examining the conditions assuming a Newtonian fluid. A 25 mm diameter dowel submerged 12.5 mm will behave more like half of a 25 mm diameter sphere than a cylinder. If the kinematic viscosity (ν=0.001 m2/s) of the liquid is 1000 times that of water, then the Reynolds number is about 5, far less than the 90 needed to spawn vortexes. Re is inversely proportional to viscosity; reducing the kinematic viscosity by a factor of 10 raises Re to 50.

Drag is the force on the object moving through the tank fluid. There must be an equal and opposite net force on the liquid. Drag D for a sphere is the product of the friction coefficient CD, frontal area (π/4*d2), and dynamic head V2*ρ/2 (for water ρ=997). That force divided by the frontal area of the object is a pressure (suction actually).

A bubble will be formed if this suction behind the moving stylus is larger than the sum of the restoring forces at the liquid surface.

The slower motions and smaller styluses that the St.Johns usually use have Reynolds numbers much smaller than 5. Thus the marblings they create don't evidence inertial effects (versus the mushroom designs of my previous post).


Kinematic viscosities below 50 mm2/s (50 times that of water) would be needed to spawn vortexes in marbling.  At 50 mm2/s viscosity, a 25 mm cylinder would need to be moved at 20 cm/s over at least 16 cm before the first vortex was shed.

So existing evidence of Karman (shed) vortexes is only likely to be found in marbling produced on a tank filled with water.
Posted by Aubrey Jaffer at 9:19 PM No comments: 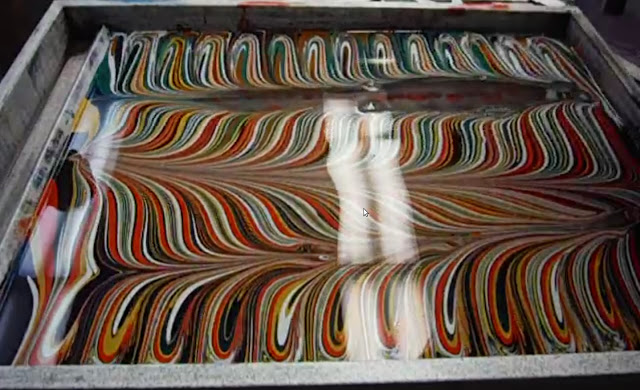 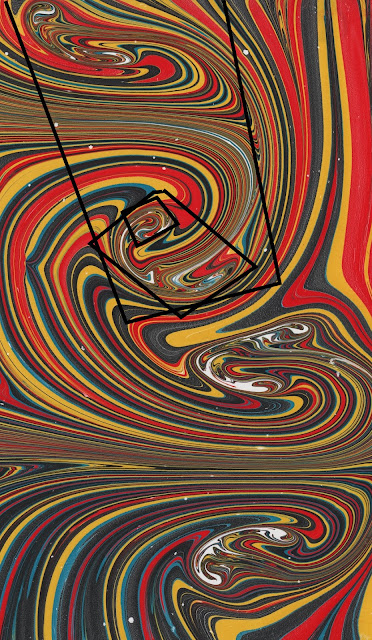 Pure Oseen flow is reversible; reversing the flow at the origin returns the system to its original state.  With its sub-mushrooms, the mushroom flow does not look reversible.
Posted by Aubrey Jaffer at 8:52 PM No comments: 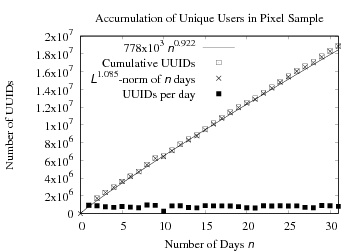 It's been 7 months since my last post.  The process of downsizing to a smaller home last winter put my projects on hold.

Although fractals have stubbornly refused to appear in my investigation of self-similar surface roughness, they have shown up at my day job as a data scientist at Digilant.

Investigating the possibility of combining weekly counts of unique user IDs, I discovered that the L^p-norm does so with surprisingly good accuracy on digital advertising datasets.  The L^p-norm implies a scaling law.  My son Martin (who also works at Digilant) noticed that the scaling law exponent is a fractal dimension.  The L^p-norm and scaling law are implied by the Pareto distribution of lifetimes in a population.  This link between the L^p-norm and fractal dimension should have application beyond counting populations.