... given a point P and a new ink drop of radius r centered at C, move the point radially from C to:


One correspondent complains that, because the divergence of this transform is not zero, it can't be incompressible. 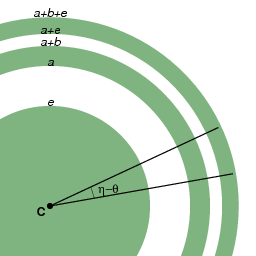 However, I can show that this transform preserves the area of all neighborhoods not containing C. Consider the annulus centered on C having inner radius sqrt(a/π) and outer radius sqrt((a+b)/π). Its area is b.

Because this transform is radially symmetric, any annulus slice with sides forming angles with C of θ and η will map to the expanded annulus slice between the angles of θ and η. Because the annulus and slices can be made arbitrarily small, all neighborhoods not containing C map to regions having the same area.

Posted by Aubrey Jaffer at 1:03 AM No comments:

The namedColor2Type is a count value and array of structures that provide colour coordinates for 7-bit ASCII colour names. For each named colour, a PCS and optional device representation of the colour are given. Both representations are 16-bit values and PCS values shall be relative colorimetric. The device representation corresponds to the header's "colour space of data" field. This representation should be consistent with the "number of device components" field in the namedColor2Type. If this field is 0, device coordinates are not provided. The PCS representation corresponds to the header's PCS field. The PCS representation is always provided. Colour names are fixed-length, 32-byte fields including null termination. In order to maintain maximum portability, it is strongly recommended that special characters of the 7-bit ASCII set not be used.


This namedColor2Type specification dates back to version 3.2 (1995), perhaps earlier. Only XYZ and L*a*b* colors are supported. Although version 4.2 defines "multiLocalizedUnicodeType", namedColor2Type is restricted to ASCII (and length less than 32.B). The colors in this table are specific to the profiled device. So namedColor2Type appears to be intended for including "spot" colors (such as from Pantone) in a device profile, not for device-independent color dictionaries.
Posted by Aubrey Jaffer at 12:51 AM No comments: 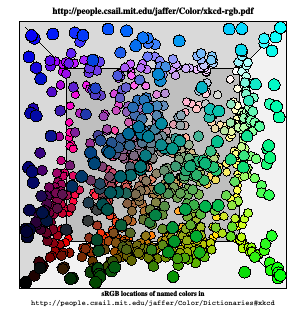 XKCD's 2010 color name survey is similar to the Color Naming Experiment. Rectangles of RGB colors on a white background were presented for the subject to name.

Compared with Color Naming Experiment, XKCD has better coverage of the darkest octant.

The catalog compares XKCD with CNE. Most of the darker shades common to both dictionaries are darker in XKCD. Greens seem to be overrepresented, probably a result of generating samples from a color-space which is perceptually very nonuniform.

With its larger set of dark colors, the XKCD Color Name Dictionary surpasses the Color Naming Experiment dictionary (and X11) for surface colors, although a large portion of its colors will not print faithfully.
Posted by Aubrey Jaffer at 2:05 PM No comments: 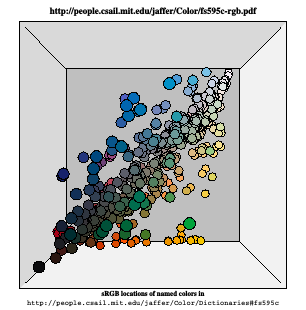 New on my Color Dictionaries webpage, US Federal Standard 595C. Although not a general-purpose source, these colors are of use when rendering post-boxes (15050), school-buses (13415), flags (UN Flag Blue 35250), signs and military clothing and equipment.
Posted by Aubrey Jaffer at 11:24 PM No comments: