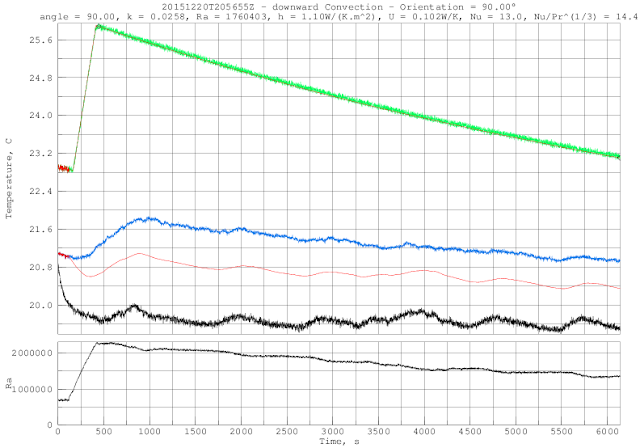 The red lines are the simulations; the others are measured. The backside simulation expects more convection than was measured, resulting in the measured back face temperature being higher than its simulated temperature.

The streamlines in Fujii and Imura[76]'s figure 14(f) show air from the edges of the plate moving toward the rising column at the plate's centre. But in the Convection Machine this air has already been heated by the rough (downward) face and four sides. Thus the convection from the (upward) back side would be reduced and its temperature higher than if the other faces were not convecting.

With the rough test surface facing downward its convection is not affected by the other faces. With the plate 5 K hotter than ambient, convection from the bottom face is about 0.6 W and about .348 W for each vertical face. Their combined 2 W dwarfs the .297 W expected through the insulation for the back face (upward). So it is not surprising that the back face convection is reduced.

If the rough test surface faces up, then its expected 20.3 W convection will experience reduction from the 1.63 W of convection from the other faces.  Unfortunately, in this case it does affect the measurements.

Posted by Aubrey Jaffer at 10:49 PM No comments:

I have rewritten the Scaled Colburn Analogy Asymptote section to address the Convection Machine measurements at low Reynolds numbers: 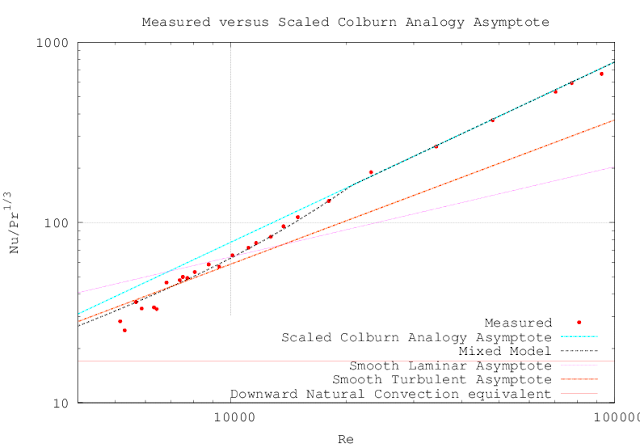 The logarithmic scale amplifies the variances below Re=10000.  The graph below shows Nu/Pr1/3 on a linear scale where variations can be seen as comparable in magnitude to the variation between experiments where Re is larger than 10000. 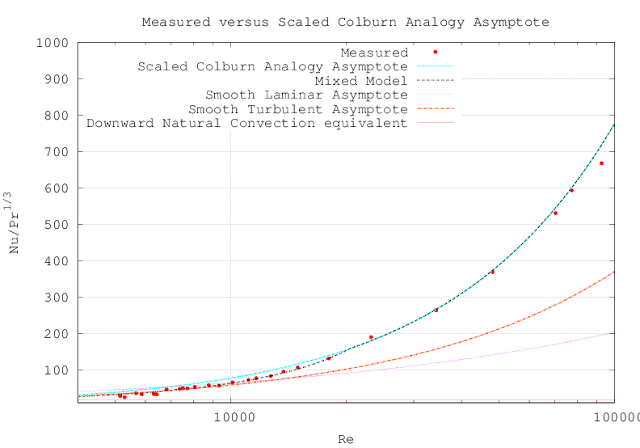 The revised formula, which includes the Re range over which the surface should be treated as rough, is:

Posted by Aubrey Jaffer at 8:19 PM No comments:

Years ago I heard advice to experimental physicists to continue refining their experiments, even after they yield a hoped-for result.

Last week I realized that if I switched the wind-tunnel fan to the lower speed setting, it might be able to run at speeds lower than 100r/min.  I tried it and it worked!  This updated plot has points at Re values less than 10000 and they show significantly less convection than expected.  As in an earlier post, there would be many possible explanations for finding too much convection, but not for finding too little.

At these low wind speeds the fan speed wanders through a +/-10% range and the convection measurements are averaged over time.  I have rewritten my program to compute the convection over smaller intervals than the whole trial and included both the whole trial and smaller runs in the graph.  My program also averages measurements through a trapezoidal window, which reduces the variation between the smaller intervals within an experimental trial. 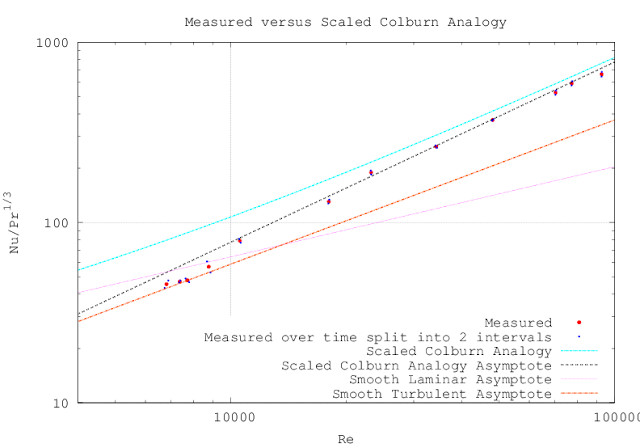 Here is a link to a pdf of plots splitting the measurements in 2 through 8 pieces.  Each trial's dots are distributed vertically, reflecting the noisy temperature readings.

The four lowest trials cluster near the asymptote for turbulent convection from a smooth surface, even though the rough surface asymptote would convect more heat.  In the "Measured over time split into 4 intervals" chart it is seen that the plate spends most of its time over the range between the two asymptotes. 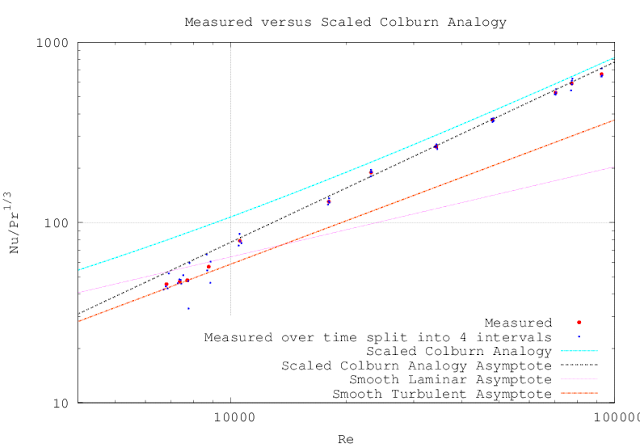 If the switching between asymptotes were correlated with fan speed variations, we would expect to see the dots for each trial on a slanted line; but they are roughly vertical.  The transition between laminar and turbulent forced convective modes remains an unsolved problem for theory.  Modelling the transition between these two turbulent forced convective modes may be as intractable.
Posted by Aubrey Jaffer at 10:41 PM No comments: